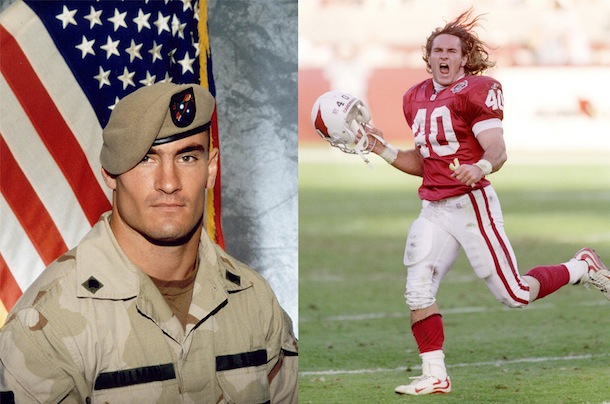 “On the battlefield he gained respectful fame. With many medals of bravery and stripes to his name. He grew a beard as soon as he could to cover the scars on his face, and always urged his men on”  The General – Dispatch

Today is Veterans Day. Please take some time to reflect on Veterans you know, and all those unknown Veterans out there. They are all worthy of appreciation and respect.

Civilians are able to enjoy the freedoms granted to them by the United States Constitution because of Veterans. “Many gave some, some gave all.” We honor all Veterans out there. Thank you for your service.

One particular Veteran near and dear to Street Smart Sports is none other than Patrick Daniel Tillman (1976-2004). For some, this is just a reminder of a personal hero. For others, this may be insight into a true American Hero.

Pat Tillman was a US Army Ranger. He paid the ultimate sacrifice in Spera, Khost Province, Afghanistan, in 2004. Posthumously he was promoted to Corporal. He was given the Silver Star and Purple Heart Medals.

His story is remarkable. He gave up his NFL lifestyle and salary to join the Army in June 2002, in the aftermath of the September 11th terrorist attacks. Pat Tillman turned down a $3.6 million three-year contract with the Arizona Cardinals to enlist in the U.S. Army to serve his country.

The decision was not impulsive; it was calculated. Pat Tillman was an intelligent man. What many people do not realize is that he graduated from Arizona State University with a cumulative 3.85 GPA. He was not at Arizona State University just to play football. School was important to him. Yes, he was the best player on his team, and led his team to a Rose Bowl, and was named Pac-10 Defensive Player of the Year, but he cared about being well-rounded and intellectual. He prided himself on being different. He received many academic awards including the prestigious Clyde B. Smith Academic Award in 1996 and 1997.

He was well-read. He loved to think deeply about the world and analyze it. He loved philosophy, poetry, and epic poetry, with a particular interest in Ralph Waldo Emerson and Henry David Thoreau. He decided his life and talents would be best utilized serving his country. Thus, he enlisted in the U.S. Army with his brother Kevin. Kevin gave up his opportunity to play professional baseball in order to enlist. Pat and Kevin were a band of brothers and did it together.

During his training for Army Ranger School, Pat was having a difficult time. His story became national news. He was treated differently than the other Army Ranger Candidates. He hated this. In his mind, he was just another guy serving his country. He hated the attention and all that came with it. Pat was unselfish and extremely humble. He was forced to do extra work and held to a higher standard. Eventually, he overcame his struggle and completed Army Ranger School. Still, he wanted to be just another guy. Deep down, he knew his self-worth, but he was never boastful or self-centered. He was extremely fit and the training was not as exhausting on him as many of the other guys. He wanted to get right to action and could not wait to fulfill his dream of actually serving.

Eventually, Pat and Kevin served several tours in Iraq and Afghanistan. In 2004, the world was changed forever. Pat Tillman was shot and killed in Afghanistan. His wife Marie Tillman was left widowed. Married for three short years, she lost the love of her life. Kevin lost his best friend and brother. Pat’s parents lost their golden child. The world lost a statesman; a role model; a loving soul; a Hero.

More disturbing, Pat was killed by friendly fire. Reading about Pat, he would have died for his country by protecting a fellow soldier without question. He was willing to sacrifice himself for the greater good. That’s the way he was on the football field and as a human being. It is so frustrating to hear that he was deprived of that chance. He was shot and killed by his own.

Without getting into the details, his brother and family were not notified of this. The narrative was that he was killed in action by the enemies. His brother continued to serve his country without being told the truth. Eventually, Kevin discovered the truth. After three years in the Army, Kevin was honorably discharged from the Army.

Thank you for your service Patrick Daniel Tillman. You are a hero to all. We hope the world can move away from warfare and towards diplomacy. We do not want to lose more young lives like yours. We know you lived for freedom, justice, and equality. Hopefully, you are no longer used as a political tool to justify war. You are so much more than that. Your story deserves to be told. The good and the bad.

Based on the Book: Where Men Win Glory by Jon Krakauer

The General by Dispatch

View all posts by streetsmartsports